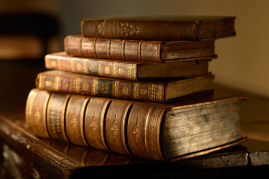 Read the series on the 1833 New Hampshire Confession of Faith so far.

Who is God? What is He like? Is He a subjective being, able to be shaped, interpreted and re-made in our own image, at our own whim, according to the latest flight of our own fancy? Or, is He an objective reality, a personal, relational, and real Being who must be reckoned with?

Here, I take a look at what the 1833 New Hampshire Confession of Faith has to say about God:

We believe that there is one, and only one, living and true God, an infinite, intelligent Spirit, whose name is JEHOVAH, the Maker and Supreme Ruler of heaven and earth;[1] inexpressibly glorious in holiness,[2] and worthy of all possible honor, confidence, and love; [3] that in the unity of the Godhead there are three persons, the Father, the Son, and the Holy Ghost;[4] equal in every divine perfection,[5] and executing distinct and harmonious offices in the great work of redemption.[6]

The Christian faith has answers. Historically, Christians have preserved systematic statements of bible doctrine in confessions. These documents quickly and accurately outline what a particular Christian group believes the Bible teaches about certain topics. The doctrine of God is obviously an important topic! Let’s take a closer look at what this confession of faith says:

We believe that there is one, and only one, living and true God,

This is the great statement of Christian monotheism. There are not “gods.” There is simply one, single God. He is alive. He has always been alive, and He will always be alive. He is the one true God. By this, the creed directly states all others “gods” are false, counterfeit frauds.

. . . if religion consists merely in feeling the presence of God, it is devoid of any moral quality whatever. Pure feeling, if there be such a thing, is non-moral. What makes affection for a human friend, for example, such an ennobling thing is the knowledge which we possess of the character of our friend. Human affection, apparently so simple, is really just bristling with dogma. It depends upon a host of observations treasured up in the mind with regard to the character of our friends.

But if human affection is thus really dependent upon knowledge, why should it be otherwise with that supreme personal relationship which is at the basis of religion? Why should we be indignant about slanders directed against a human friend, while at the same time we are patient about the basest slanders directed against our God? Certainly it does make the greatest possible difference what we think about God; the knowledge of God is the very basis of religion.[7]

God has revealed Himself through the Holy Scriptures, that “perfect treasure of heavenly instruction; that . . . has God for its author, salvation for its end, and truth without any mixture of error for its matter.”[8] You can learn about God through His word. You know God spiritually and experientially through the regenerating work of the Holy Spirit, which then results in repentance and faith in the Gospel of His dear Son, Jesus Christ.

an infinite, intelligent Spirit, whose name is JEHOVAH,

God does not have concrete form. He does not physically look like us. He is Spirit. To be sure, God can take whatever form He wishes to suit the occasion. He has appeared as a burning bush (Ex 3:1 – 4:17). He has appeared in the likeness of human form (Eze 1:26-27). But, that is not His natural state.

“Jehovah” was the old-fashioned way of pronouncing the Divine Name in Hebrew. Now, the preferred pronunciation is YHWH. True, it doesn’t have quite the same ring to it, but it is the better pronunciation. The very idea of a name indicates God is personal, relational, knowable and understandable – up to a point. It also personifies Him.

There was only one Abraham Lincoln, and this name bears all the freight of that man’s character, personality and achievements. The very reference of the name conjures up old Civil War photos of the tired President, wearied and beaten down by years of the most torturous and tragic war this country has yet known.

Likewise, the very name “JEHOVAH” carries with it all the freight and theological implications of who the Holy Scriptures reveal Him to be – and what He has promised for all those who love Him, who are called according to His purposes.

the Maker and Supreme Ruler of heaven and earth;

God created creation itself. It is a fact.[9] He did not use raw materials already at hand; He created creation out of literally nothing. It also means creation was originally “very good.” The fact that it is not so any longer is our fault, not His. This means He is Lord of all, because He is Creator of all. He is the “Supreme Ruler” of heaven and earth. There is nothing and nobody who is not under His jurisdiction and authority. His word is law, and His edicts demand obedience.

His promises of perfect salvation, forgiveness, reconciliation, cancellation of righteous hostility, adoption and heavenly citizenship in His current and future kingdom are sure and steadfast. You can count on them. Likewise, His promises of eternal destruction in flaming fire, away from His presence, for those who do not obey the command of the Gospel are true. They are just. They are right.

When you were a child, your father might have once said to you, “I brought you into this world, and I can take you out of it!”

Well, God is your “Father” in the sense that He created you, sustains you, and has given you all the blessings you enjoy – whether you have obeyed the command to repent and believe the Gospel, or not. He brought you into this world. He has the right to tell you what to do, how to do it, and to demand obedience to the Gospel message He sent His One and Only Son into this world to live, die and rise from the dead for.

inexpressibly glorious in holiness, and worthy of all possible honor, confidence, and love;

Because God is who He is, He deserves all praise, honor, love and respect. Holiness is His most fundamental and definitional attribute. It is the attribute from which all others flow. His love never comes at the expense of His holiness. It is why He cannot “forgive and forget.” That would be unjust, in light of our crimes and the appropriate punishment we all deserve.

Nobody in their right mind would suggest a murderer be set free without punishment, that the victims should just “forgive and forget.” That would be wicked. It would be an “injustice.” Likewise, God will not forgive without appropriate punishment for our crimes; a propitiation to “set things right” and pay for the evil committed.

When it comes to man’s natural standing with God, the crime is far greater than a worldly murder – we have sinned again the Holy God, the Maker and Supreme Ruler of heaven and earth! With a victim so holy, how swift, terrible and far-reaching must our just punishment be!?

And yet, the fact is that God provided a way to have forgiveness, through the substitutionary and sacrificial work of His only-begotten Son. This shows His mercy, love, grace and kindness. It is infinite. It is undeserving. We – all of us – owe Him our loyalty and allegiance. We all must bow the knee to Christ as Lord, and God as Creator and King. We do this through repentance and faith in the Good News of Jesus Christ. God has made a way of salvation which does not impugn His perfect holiness, and thus He is “worthy of all possible honor, confidence, and love.”

that in the unity of the Godhead there are three persons, the Father, the Son, and the Holy Ghost;

The definition of the Trinity is this: In the One Being that is God, there eternally exists three co-equal and co-eternal divine Persons; namely, the Father, Son and the Spirit.[10]

equal in every divine perfection,

and executing distinct and harmonious offices in the great work of redemption.

This is the concept of the “economic Trinity.” There is no distinction of power, glory, majesty or worth. But, there is a clear differentiation of roles and responsibilities. These roles do not reflect on the relative status of the one assigned; rather, they simply allow us to see the perfect, complementary and harmonious ways each Person works to achieve the ends of the other.

We have one, single, true God, who has revealed Himself to consist of three distinct Divine Persons, each exercising His own distinct and harmonious office in the great work of redemption. I have never seen a better explanation of this marvelous truth than the one Millard Erickson offered:[12]

There may seem to be a conflict between attributing creation to the Father, the Son, and the Holy Spirit, and maintaining that each member of the Trinity has his own distinctive work. Yet there is not a problem, unless we think that there is but one form of causation.

When a house is built, who actually builds it? In one sense, it is the architect who designs and creates the plans from which it is to be constructed. In another sense, it is the contractor who actually carries out the plan. Yet the contractor himself probably does none of the actual construction. It is the construction workers who build the house. But without the materials that go into the making of the house there would be no structure. Thus, the building-material suppliers may be said to be the cause of the house’s construction. Or the lending agency that supplies the money for the construction and holds the mortgage might be said to have built the house. Finally, the owners, although they may not drive a single nail, are in a sense the ones who build the house, since they sign the legal papers authorizing the construction and will make the monthly mortgage payments.

Each one, in a unique way, is the cause of the house.

This is who your God is. He is yours, you know – whether you confess Him as Lord, or not.