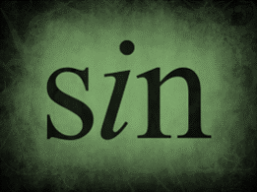 Read the series so far.

We’ve talked about sin. We’ve learned it is:

If you think of “sin” as merely an outward action, then you’re terribly wrong. We’re all born in the status, condition and state of rebellion against God. We’re born as sinners, the fruit of the poisonous tree which was ruined by Adam so long ago, and has been passed down from generation to generation ever since. Because that is true, the result is that we think evil and wicked thoughts all the time. And, sometimes, we act on those sinful thoughts and intents of our hearts.

What is at the bottom of all this? What is at the heart of this status and condition of lawlessness, which results in wicked thoughts and actions? It is a desire for autonomy, for independence from God. When you get right down to it, sin is about a desire to overthrow God (who is your Creator and sustainer) and govern yourself.

Now we come to the really interesting question. We all know Jesus has never sinned, and we certainly know He didn’t sin in the incarnation. But what, exactly, does that even mean?

Here is a key text

Since then we have a great high priest who has passed through the heavens, Jesus, the Son of God, let us hold fast our confession. For we have not a high priest who is unable to sympathize with our weaknesses, but one who in every respect has been tempted as we are, yet without sin. Let us then with confidence draw near to the throne of grace, that we may receive mercy and find grace to help in time of need (Heb 4:14-16).

We can’t understand what on earth the writer is saying here unless we first understand the context. In this passage, the writer of Hebrews is picking up his previous train of thought, which ended in Hebrews 3:6:

At this point, the writer went on a brief excursus about rebellious Israelites after the exodus, and warned his readers to not make that same mistake (Heb 3:7 – 4:13).

Now, we come to our text:

Since then we have a great high priest who has passed through the heavens, Jesus, the Son of God, let us hold fast our confession. For we have not a high priest who is unable to sympathize with our weaknesses, but one who in every respect has been tempted as we are, yet without sin. Let us then with confidence draw near to the throne of grace, that we may receive mercy and find grace to help in time of need (Heb 4:14-16).

What is that confession? What I just outlined, above! But, what are the grounds for this confidence? Why does the writer exhort them to “seize” the confession and cling to it for spiritual life? It is because Jesus understands your struggles, and, because He understands, He can save you from them.

Jesus is a high priest who sympathizes with your weaknesses. He is not a cold, aloof and ivory-tower Savior who dispenses God’s mercy, grace, love and kindness from an antiseptic, pure abode in heaven. In every respect, Jesus has been tempted and tested just like we are. Yet, Jesus did not sin.[1]

Jesus Christ deliberately and voluntarily set His divine status and privileges aside during the entire course of His earthly ministry. As a real flesh and blood man who didn’t use any of those divine powers as a crutch, He took on everything Satan threw at Him – and He succeeded where Adam, Eve, you and I will always fail. He’s been touched with the real weight and feeling of the same weaknesses you’re suffering through – He’s been there!

All this makes Jesus qualified to be a perfect, merciful and faithful High Priest:

Most of all, though – Christ knows what it’s like to be handicapped by all these difficulties, and yet He still perfectly overcame them and defeated Satan anyway. And yet, Jesus can sympathize, be merciful and show such a depth of compassion precisely because He’s been in our shoes! His compassion is a real one, not an intellectual one. He knows everything you’re going through now, or will ever go through – because He’s been there and defeated your problems firsthand.

Let’s return to our definition of sin:

This is what Jesus did in the incarnation:

The First and Last Adam

The contrast is seen most clearly in Jesus’ temptation and testing by Satan in the wilderness (Lk 4:1-13); specifically, the temptation of autonomy. Satan promised Jesus all the kingdoms of the world, in exchange for overthrowing God and in favor of Satan. This goes right to the heart of the matter. Will Jesus violate the Father’s will? Will Jesus short-circuit the Cross, and spare Himself the pain and agony of death? Here, Jesus proved His superiority to Adam:

Yet, the question remains – did Jesus feel temptation in the same way we do? Did he feel an internal tug, pull and urge to commit a sinful action? The answer is an emphatic, “No!” Sin, as we’ve seen, encompasses the thoughts and intents of the heart. Jesus never experienced any thought or intent which was contrary to God’s law, because He was not born with a sin-nature. Jesus was not conceived by sinful human beings; He was conceived by a miracle of the Holy Spirit.

We must always remember that Jesus did not defeat Satan as a sinful, fallen human being.[2] He defeated Satan as a sinless, holy, morally innocent man. His human nature was identical to Adam’s – He was Adam 2.0. As one Baptist confession reads:

We believe that man was created in holiness, under the law of his Maker; but by voluntary transgression fell from that holy and happy state . . .”[3]

Jesus, too, was “created in holiness” in the sense that He took on an innocent, morally pure human nature – just like the one Adam had. Jesus was not tempted from within; there was no sin nature to tempt! Just like Adam, He was tempted from without. As a morally innocent, sinless and holy man, he was tested and tempted just like Adam was, and triumphed.

What are the implications for the Christian today, looking back to Jesus’ perfect life, sacrificial death, and miraculous resurrection? We’ll look at that next time . . .

[2] Lewis S. Chafer is usually pigeon-holed as a dispensational theologian, and dismissed. That is very, very unfair. It is true that he represents classical dispensationalism, a type of dispensationism which is not as popular as it once was.  Yet, his entire systematic is outstanding. I am routinely moved and challenged by his insights. His comments on Christ’s temptation is the best of the usual bunch, more helpful than Berkhof and Strong. He wrote, “. . . in all the discussion respecting His impeccability the truth is often ignored that Christ was wholly free from a sin nature and all that the sin nature generates,” (Systematic Theology, 8 vols. [reprint; Grand Rapids, MI: Kregel, 1976), 5:76.

[3] 1833 New Hampshire Confession of Faith, Article 3. See my own comments on this article here.