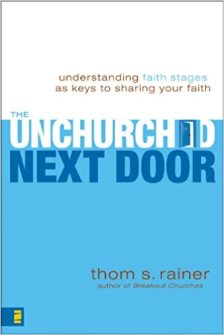 In 1969, the band Led Zeppelin released its first album. On that album, there was a little song entitled “Communication Breakdown.” It’s about a man who likes a girl, but can’t bring himself to actually speak to her. Now, as every married man knows, if you’re too terrified to ever speak to a pretty girl, then you have a potentially fatal problem . . .

For Christians, there is another kind of communication breakdown happening. Most Christians have never done anything concrete to give somebody the Gospel, at all. Now, I don’t intend to shame you into anything – there’s been enough of that over the years. Instead, I want to encourage you.

Thom Rainer is a Southern Baptist minister currently President of LifeWay Christian Resources. Not long ago, he did a remarkable amount of research and published a book entitled The Unchurched Next Door: Understanding Faith Stages as Keys to Sharing Your Faith. Consider this, from the book:

What constitutes an invitation? For many of the unchurched, it was a simple statement of invitation to come to one’s church. For others, it was an invitation that included the offer to meet someone at church to show them around. In either case, the process was pretty basic. If we invite them, they will come.

The next obvious question is: Are Christians inviting non-Christians to church? The heartbreaking answer is no. Only 21 percent of active churchgoers invite anyone to church in the course of a year. But only 2 percent of church members invite an unchurched person to church.

Why don’t you invite a friend, family member or co-worker to church this Sunday? Give it a shot.