Robert Middlekauff’s tome, The Glorious Cause: The American Revolution 1763 – 1789, is a worthy overview of the Revolutionary-War era. It picks up in the heady days immediately after the French and Indian War (also known as the Seven Years War), when a cash-strapped Britain decided it needed some additional revenue to pay off debt accumulated during the late war. It ends with the Constitutional Convention, in 1787, and the ratification of the new Constitution shortly afterwards.

This book is part of the esteemed Oxford History of the United States series, and it lives up to its billing. Each volume is written by a distinguished, responsible historian at the height of his powers. Middlekauff takes the reader into the halls of Parliament and into the homes of colonists in New England, the middle colonies, and the South.

Overall, in about 690 pages of text, Middlekauff managed to take us from the French and Indian War to the Constitutional Convention – and he managed to be substantive, deep, insightful and engaging. That’s not an easy thing to do! I appreciated the book, and liked it a lot. This is the best one-volume survey of the era I’ve read. I doubt I’ll find anything to top it. 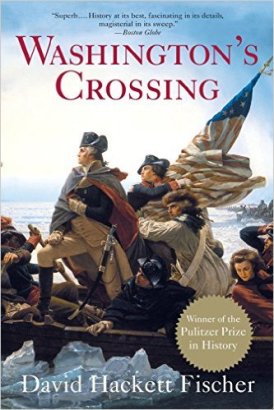 “Washington’s Crossing” by David H. Fischer is a truly wonderful book about the Revolutionary War. It focuses on the 1776 campaign across New York and into New Jersey, a truly disasterous time for the American cause. General Washington suffered one awful defeat after another, as he was constantly out-generaled and outwitted by General William Howe and the Royal Navy. As the rebel cause lay in ruins, and Washington faced the disintegration of his army near Trenton, NJ as Christmas 1776 approached, he decided that he needed to act.

This book is an in-depth look at the events surrounding the great, pivotal battles of Trenton and Princeton, and the men and armies on both sides. Truly an excellent and moving book. A perfect book to buy on this July 4th!