Tyler Robbins in Fundamentalism and Evangelicalism May 16, 2013 1,849 Words

What in the World is Evangelicalism, Anyway?!

“One area in which the New Evangelicals are united is the willingness to compromise for the sake of fellowship. This spirit could possibly be identified as the genius of the movement. Allowing varying opinions in nearly every field of doctrine, they are united in a willingness to sacrifice conviction for fellowship. Evidence of this spirit is seen in a statement by E, J. Carnell, “Since love is higher than law, the organization is servant of the fellowship…Christ alone would rule the church. Laws are made for the unrighteous. Here is the final norm: Polity is good or bad to the degree that it promotes or hinders fellowship.” This statement obviously subordinates doctrine to love, or fellowship,” (1961, 17).

“New-evangelicalism was born in 1948 in connection with a convocation address which I gave in the Civic Auditorium in Pasadena. While reaffirming the theological view of fundamentalism, this address repudiated its ecclesiology and its social theory. It differed from fundamentalism in its repudiation of separatism and its determination to engage itself in the theological dialogue of the day. It had a new emphasis upon the application of the gospel to the sociological, political, and economic areas of life,” (1976, 11). 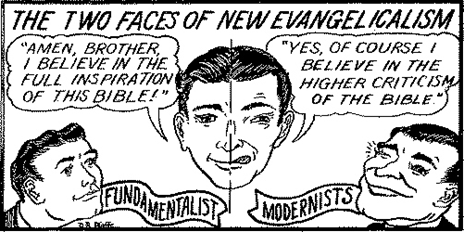 “This new type of evangelical thought and attitude has many virtues—many of them having descended from historic Fundamentalism and others arising from an honest attempt to correct some glaring weaknesses within . . . The areas which it has sought to correct include those of academic integrity, social betterment, discussions with non-Fundamentalists, and journalistic excellence in order to attract the religious, the respectable, and the intellectuals whatever their doctrinal convictions. Another area of study has been that of cooperation with all existing religious bodies, denominations, and groups for the purposes of infiltration, not separation. In fact many prominent men in this movement openly advocate closer ties with those whom old-time Fundamentalism tagged apostates and Liberals,” (1962, 21-22).

During the first half of the twentieth century, ― “fundamentalist” and “evangelical” meant roughly the same things. People might use either name to describe those who preserved and practiced the revivalist heritage of soul winning and maintained a traditional insistence on orthodoxy. After the Fundamentalist-Modernist controversies, however, fundamentalism became increasingly prone to fracture. Pickering (1994) observes that evangelicalism was born with a particular “mood.” This particular mood was a marked dissatisfaction with a militant ministry philosophy. Pickering remarked that the militant excesses of some fundamentalists “disheartened younger men, and  . . . propelled them toward a softer and broader position,” (7-8).

The National Association of Evangelicals (NAE), founded in 1942, admits their organization was formed in response to a consensus that a new course must be charted, one that did not perpetuate the mistakes of excessive militantism:

“Evangelical Christianity, while remaining outside the cultural mainstream, established a thriving subculture, centered around engaging personalities and independent institutions. The downside to this emerging popular movement was that many radio preachers, Christian college presidents, and pulpiteers tended to speak and act independently with seeming little regard for the big picture. Instead of acting like brothers, they acted like rivals, weakening the possibilities of meaningful Christian witness” (“History”).

The schism was never over doctrines of the so-called “fundamentals.” The clashes between fundamentalism and evangelicalism frequently centered around the biblical parameters of ecclesiastical and personal separation. Most self-proclaimed fundamentalists today could sign the NAE creed! (“Statement of Faith”). It is not about doctrine, it is about a particular philosophy of ministry.

Rolland McCune (2004, 27-52) and Ernest Pickering (1994, 7-11) have both outlined their own views of the cause of this split. There is considerable overlap in their analysis;

There is simply no space to adequately cover all of these issues, but a brief survey of some of them will be attempted here.

There was a general impetus to present the fundamentals of the faith in a positive, not simply defensive, way (McCune, 29). Evangelicals were more willing to forgive doctrinal differences for the sake of the Gospel. The NAE was formed in 1942, according to its formal history, “when a modest group of 147 people met in St. Louis with the hopes of reshaping the direction of evangelical Christianity in America.” Ockenga challenged Christians to put aside denominational differences for the sake of a more consolidated witness for Christ (NAE, “History”).

Well-known fundamentalist leaders such as John R. Rice and Bob Jones Sr. and Jr. initially supported the NAE, but eventually left over the organization’s different philosophy of separation. “These departures consolidated the leadership of the NAE in the hands of those with less restrictive convictions who wanted a softer stand and a far less militant direction,” (McCune, 31).

Fundamentalists could not bring themselves to endorse ecclesiastical unity to the same extent. The philosophy of evangelicalism seemed to be, “Be positive, not negative!” Pickering (1994) astutely observed, “while this statement has an emotional appeal to many, it is not a Biblical philosophy. Scripture is both positive and negative – it is for some things and against others,” (8).

These men continued to reject and oppose liberalism, but dropped militancy as a primary aspect of their identity. George Marsden argued that, “aspiring to be a broad coalition of theologically conservative Protestants, they usually tolerated some other theological differences, including Pentecostalism. Evangelism, as epitomized by Billy Graham, remained their central activity, although the forms of presentation now sometimes avoided accentuation of the offensiveness of the Gospel,” (as cited in Pickering, 1994, 11).

Carl F. H. Henry penned a book in 1947, The Uneasy Conscience, in which he decried the lack of social involvement in fundamentalism.

“If the Bible believing Christian is on the wrong side of social problems such as war, race, class, labor, liquor, imperialism, etc., it is time to get over the fence to the right side. The church needs a progressive Fundamentalist with a social message (xx).

“Fundamentalism is the modern priest and Levite, by-passing suffering and humanity . . . by and large, the Fundamentalist opposition to societal ills has been more vocal than actual,” (2-3).

McCune argues that an anti-dispensational bias was at the root of this call for social consciousness (36). It would be over-reaching to suggest that dispensationalism was virtually synonymous with fundamentalism – it was not (McCune, 1996, 179-180). However, McCune argues that theology was the root of this renewed social activism; posttribulationism “emancipated them from dispensational pessimism and gave their societal activism biblical legitimacy,” (2004, 36-37, see especially footnote #42). Pickering agreed with McCune and tied evangelical theology directly to a repudiation of separation; “new evangelicals were not separatists and hence resisted the inevitable conclusions brought about by the acceptance of dispensational thought,” (1994, 17).

George Dollar (1962) argued for an altogether different philosophy of ministry;

This anti-dispensational bias converged with a general dissatisfaction with a militant philosophy – thus social activism came to typify evangelicalism as a movement.

Disenchanted fundamentalists also reacted against a perceived anti-intellectual bias among their brethren. “Narrow-mindedness” was repudiated. A contemporary critic, Douglas Walton, noted “the absence of intellectual respectability was a very sore spot . . . the result has been a striving to attain that status,” (1961, 26).

Pickering, in a 1964 review of a work by Ronald Nash advocating new evangelicalism, took issue with Nash’s pursuit to “recapture a place of respectability in the modern religious and academic world.” Contemporary critics seem to be unanimous in decrying the new evangelical’s quest for scholarship and prestige. Dollar wrote, “it would seem that the major prerequisite for joining the evangelical elite is the number of degrees one can brandish, the impressive list of schools attended, and the staggering account of authors read and quoted,” (1962, 26).

It is a profound mistake to suggest fundamentalism is anti-intellectual. Admittedly, there are some among us who espouse this view and they are certainly wrong. It is also incorrect to impugn the motives of evangelicals who are scholars. The problem arises when Christian scholarship stops being about serving the Church and starts being about respectability and prestige in the eyes of men. The new evangelicalism explicitly sought this prestige and therefore drew swift condemnation from contemporary fundamentalists.

An article appeared in the magazine Christian Life in March, 1956. It was a collaboration between many prominent advocates of the new evangelicalism. Entitled “Is Evangelical Theology Changing?,” it enumerated eight points about their new movement (Crum, et al. 16-19);

Above all, this groundbreaking article advocated an altogether different philosophy of ministry. There was, initially, broad agreement on essentials of the faith, but new evangelicalism was different. It was a negation of “embarrassing” militancy for the sake of evangelism. “That’s why to the man on the street fundamentalism got to be a joke. As an ignorant, head-in-the-sand, contentious approach to the Christian faith, it seemed as out-dated as high-button shoes,” (16).

The roots of historic evangelicalism emphasized unity over separation and sought to engage in the theological dialogue of the day. It had a distinctly different “attitude” or “mood” than fundamentalism. Any thinking Christian simply must grasp this point – it is not doctrine which separates the two camps; it is a philosophy of ministry.

The next article in this series will examine the concept of secondary separation, surveying the views of a variety of fundamentalists on the issue.

Pickering, Ernest. (1994). The Tragedy of Compromise: The Origin and Impact of the New Evengelicalism. Greenville, NC: BJU.