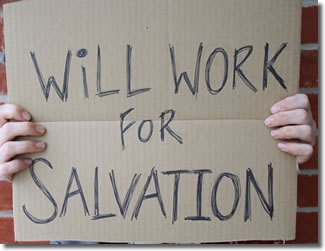 It is often claimed that James and Paul present different Gospels; that Paul advocates justification by faith and James presents a works based salvation. Well, what of this charge?

What doth it profit, my brethren, though a man say he hath faith, and have not works? can faith save him? If a brother or sister be naked, and destitute of daily food, And one of you say unto them, Depart in peace, be ye warmed and filled; notwithstanding ye give them not those things which are needful to the body; what doth it profit? Even so faith, if it hath not works, is dead, being alone.

Yea, a man may say, Thou hast faith, and I have works: shew me thy faith without thy works, and I will shew thee my faith by my works. Thou believest that there is one God; thou doest well: the devils also believe, and tremble. But wilt thou know, O vain man, that faith without works is dead? Was not Abraham our father justified by works, when he had offered Isaac his son upon the altar? Seest thou how faith wrought with his works, and by works was faith made perfect? And the scripture was fulfilled which saith, Abraham believed God, and it was imputed unto him for righteousness: and he was called the Friend of God. Ye see then how that by works a man is justified, and not by faith only. Likewise also was not Rahab the harlot justified by works, when she had received the messengers, and had sent them out another way? For as the body without the spirit is dead, so faith without works is dead also.

For if Abraham were justified by works, he hath whereof to glory; but not before God. For what saith the scripture? Abraham believed God, and it was counted unto him for righteousness (Rom 4:2-3).

Here, critics claim, we find irrefutable proof that these disciples were at odds with one another. How sad it is that these skeptics persist in their unbelief, and refuse to fully examine the Scriptures. James certainly does not declare Abraham and Rahab justified by their works, but merely shows us the fruit of their authentic salvation.

God’s purpose in ordering Abraham to offer up Isaac, his only son, was to tempt or test him (Gen 22:1), not declare him righteous! When God saw that Abraham demonstrated the fruits of real faith and trust in Him, he sent an angel to stop him (Gen 22:11-12). This test was not for God, it was for Abraham.

The Old Testament told us Rahab was spared because she hid the Israelite spies sent to scout out the land (Josh 2:1; 6:17, 23, 25). The writer of Hebrews tells us it was her faith that saved her (Heb 11:31), and this revelation comes to us in that great and wonderful passage which extolls the faith of mighty men from ages gone by (Heb 11). There is no hint of justification by works.

Remember also that Paul and James were agreed on the content of the Gospel (Gal 2:1-10). It is folly to suggest this was not so; if it were, we would have evidence of some sort of major disagreement between Paul, Peter, John and James, all of whom agreed on the terms of salvation at that fateful meeting in Jerusalem (Gal 2:1-10). James’ main concern in his epistle was to exhort Christians to be useful and to explain the nature of real faith; he was not penning a systematic exposition of doctrine like Paul was in Romans. Scripture must be analyzed in its own context. James wanted Christians to be useful, therefore ” . . . faith, if it hath not works, is dead, being alone,” (Jas 2:17). The entire context of his epistle is that real faith produces results!

Consider John the Baptist’s words to Jews who came forth to be baptized in the Jordan River;

Then said he to the multitude that came forth to be baptized of him, O generation of vipers, who hath warned you to flee from the wrath to come?Bring forth therefore fruits worthy of repentance, and begin not to say within yourselves, We have Abraham to our father: for I say unto you, That God is able of these stones to raise up children unto Abraham (Lk 3:7-8).

John didn’t want them unless their faith was proven by deed. They were trusting in physical lineage with Abraham for salvation, and this would not do. There should be some fruit of real salvation. Paul said much the same thing in his letter to Titus when he urged the young preacher to exhort his people to be ready to perform good works.

This is a faithful saying, and these things I will that thou affirm constantly, that they which have believed in God might be careful to maintain good works. These things are good and profitable unto men (Titus 3:8).

How much clearer can it be? Works save nobody, but they are the fruit of saving faith. Paul, like James, was concerned that Christians not be “unfruitful” in their walk with the Lord;

And let ours also learn to maintain good works for necessary uses, that they be not unfruitful (Titus 3:14).

It is clear that these men do not present different Gospels at all. They agreed on the content of the Gospel. They both emphasized that works are the proper fruit of salvation. John the Baptist agreed with them. And, by the way, Christ agreed with them all:

For a good tree bringeth not forth corrupt fruit; neither doth a corrupt tree bring forth good fruit (Lk 6:43).

A man is known by his fruits, for good or bad. I pray that those confused men and women who believe in works salvation come to a saving knowledge of Jesus Christ.