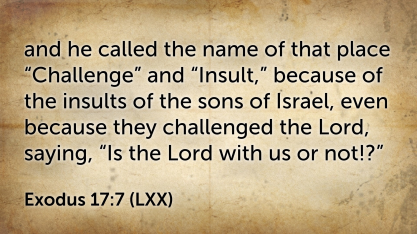 On their journey towards Mt. Sinai from Egypt, the Israelites became angry. Actually, they became angry a lot, but this time they said something particularly foolish:

Exodus 17:7 (KJV): And he called the name of the place Massah, and Meribah, because of the chiding of the children of Israel, and because they tempted the LORD, saying, Is the LORD among us, or not?

I spent some time pondering why on earth they would ask this question. It’s a pretty stupid question, really. Is the Lord with them? Well, let’s quickly re-cap everything He had done for them in a few short months since Moses returned to Egypt:

In light of all this, why in the world would God’s people even ask such a foolish question? They asked it because they were ungrateful, selfish, self-centered, and inherently wicked. I’m just the same, and so are you. We’re ungrateful for God’s blessings and provisions. You’re selfish and materialistic, ignoring God’s grace and petulantly demanding still more. Like the noted philosopher Janet Jackson asked, “what have you done for me lately?”

These people had lots of reasons to trust God to provide for them and take care of them. He’d rescued and cared for them every step of the way. More than that, He was visibly revealing Himself every single moment of every single day, by cloud or by fire. If you’re a Christian by repentance and faith in Jesus Christ and His perfect, finished work, then think about the Israelites the next time you’re tempted to complain and ask anything stupid. If you’re a Christian, the Lord is always fully with you, in the Person of the indwelling Holy Spirit (cf. John 14:23).

For those who are interested, here is my own translation of this verse from the Greek Septuagint.