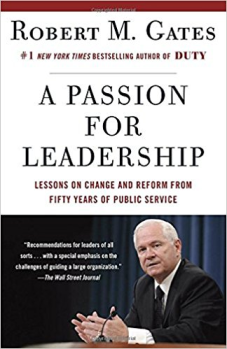 Robert Gates is a former Secretary of Defense. He served under both President George W. Bush and President Obama. I served when Gates was Secretary. I always admired the man. He struck me as competent; a leader, not merely a political appointee.

Recently, Gates wrote a wonderful book on leadership. He is uniquely qualified to write it. He served as head of the CIA, President of Texas A&M University, and as Secretary of Defense. He was in government service for fifty years. He knows what he’s talking about.

I served on active-duty for 10 years, as a government contractor, in various church leadership roles (including as a pastor), and now I’m a supervisor in state government. I’ve been intimately involved in large bureaucracies all my adult life, as a technician and as a middle manager. I’ve seen lots of people come and go, and seen plenty of mistakes. Gates’ book is the best thing I’ve ever read on leadership.

Here’s one example why:

[T]he most critical thing a new leader at any level should do is listen.

Too many new bosses arrive confident they have all the answers—the solutions to an organization’s problems—and on day one begin firing off e-mails and giving orders to “light a fire” under people, to demonstrate a new sheriff is in town ready to kick ass and take names, and to show dynamism (and control). Too many openly disdain their predecessors and all that was done before: “Things are going to be different around here now that I’m in charge!”

We all have worked for such “conquering heroes,” who see themselves as riding in on a white horse to save the day. What they do, mainly, is scare the hell out of people, who then focus on keeping out of the way—lying low—and keeping their jobs. Employees quickly come to resent the arrogant know-it-all who has just condemned the work they had been doing and either resolve to do all they can to thwart the new leader’s agenda or passively stand to one side waiting for him to fail. The conquering hero (or hostile-takeover approach) is, in my view, all wrong.