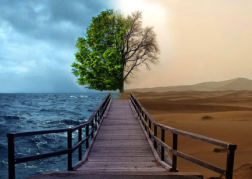 Once upon a time, in a far away land, there lived two doting husbands; Peter and George. From the outside, they were similar in every possible way. Peter was a successful businessman in the city, and George an executive at a large bank. Both were still younger men, around 40 years of age. Both had been married about 15 years. Both had two children. Each was blissfully unaware of the other’s existence.

They lived and worked in the same city, commuted to the same suburb, and, quite unwittingly, frequented the same café every Tuesday morning (at nine sharp). They moved in the same circles, in overlapping orbits, but their lives never touched . . . until yesterday.

On that day, after a particularly hard day at the office, Peter and George each found their way to a upscale florist in the city. It was an expensive place, with scandalous prices. Peter and George didn’t care – they were on a mission. Flowers and chocolates were the order of the day, and a quick trip home to the wife. Fences needed to be mended, sores patched up, an armistice signed.

You see, Peter and George had each treated their wives in a beastly fashion lately, and it was time to make amends. Battles had been fought, blood had been shed; unforgivable things had been spoken. Now, both men were prepared to surrender, and flowers and chocolates were the first tentative steps towards a cease-fire.

Home they went, fighting the same traffic, the same commuters, even (ironically) each other at one point. Finally, they arrived home, steeled themselves for marital combat, and plunged into the arena, ready to set things right so peace could reign in their households once more . . .

What happened, you ask?

Peter’s wife forgave him for his sins. George’s wife smacked him across the face, flung his dinner at him, stuffed the flowers in the toilet, and raced away to her mother’s house for the night, bringing the children with her.

Why the different reactions?

This parable illustrates two completely different approaches to a relationship with God; one Christian and the other pagan.

The divide here is about motivation.

There is a chasm between these two positions.

What difference does it make?

It makes all the difference in the world. It certainly made a difference between Peter and George, didn’t it? Some confessing Protestants seek to blur these lines, as if they’re irrelevant. One of those people is Matthew Bates.

I’ve mentioned Bates several times in the past few weeks, because I’m reading his new book Salvation by Allegiance Alone. Bates has a PhD from a Roman Catholic institution, and teaches at a Roman Catholic school. In his book, he’s deliberately trying to build a bridge that Protestants and Catholics can cross together. He’s wrong.

Consider the Tale of the Two Husbands, and the motivation Peter and George had for their actions. They had the same outward actions, but completely different goals and objectives. Now, consider what Bates wrote:[1]

As nearly all Christians agree, perseverance in allegiance is required. If the union were to be severed by an unrepentant cessation of pistis (allegiance to Jesus as Messiah-king), then the continuing presence of the union-securing and fruit-producing Spirit would be decisively ruptured; the born-again person would experience spiritual death. That individual would no longer be justified, righteous, or innocent before God; eternal life would no longer be a present possession.

Christian traditions disagree about whether or not such a severance is possible. Reformed and some Lutheran Christians prefer to speak of the impossibility of rupture (“eternal security”).

Meanwhile, Catholic, Orthodox, and some Protestant traditions believe that it is possible for an individual to enter decisively into saving union but then to depart through an unrepentant turning away.

This debate should not, however, obscure the larger point about which Christian theologians are nearly unanimous: it is necessary for an individual to persevere in pistis throughout the course of her or his lifetime in order to attain final salvation.

Bates advocates a scheme where the person obeys Christ in order to retain eternal life. No matter which way you “nuance” this, you have works salvation. I don’t believe you can argue otherwise.

Typically, Reformed Protestants have argued that loving obedience is a natural result of union with Christ. That is, because our hearts, minds, and souls have been changed, because we have a new nature, and because we now honestly seek to please God, we’ll naturally desire to obey His word. So, in that sense, “good works” are not meritorious for salvation; they’re just the fruit of it.

Elsewhere in his book, Bates rejected this view. I don’t want to go into his reasons here. However, I do want to argue that it does matter which position you take on “good works.” I’ll quote him again:

This debate should not, however, obscure the larger point about which Christian theologians are nearly unanimous: it is necessary for an individual to persevere in pistis throughout the course of her or his lifetime in order to attain final salvation.

I disagree. This is about self-conscious motivation. When the Christian does what the Bible says, what is his reason for doing it? What outcome does he expect from his “good work?” What result does he expect to achieve by it?

The Protestant (i.e. the Christian) understands salvation is a present, permanent reality, and his “good works” are merely the inevitable and grateful response of the believer to God’s grace. He loves God, and wants to serve Him.

The Roman Catholic, however, sees God’s initial grace in salvation as a gift given to the Christian, which enables him to then merit for himself eternal life:[2]

Since the initiative belongs to God in the order of grace, no one can merit the initial grace of forgiveness and justification, at the beginning of conversion. Moved by the Holy Spirit and by charity, we can then merit for ourselves and for others the graces needed for our sanctification, for the increase of grace and charity, and for the attainment of eternal life . . .

The Protestant says a Christian simply will persevere in faith and good works until the end, because he loves God and wants to serve Him. The Roman Catholic (and, apparently, Matthew Bates) says the Christian must persevere in order to attain eternal life.