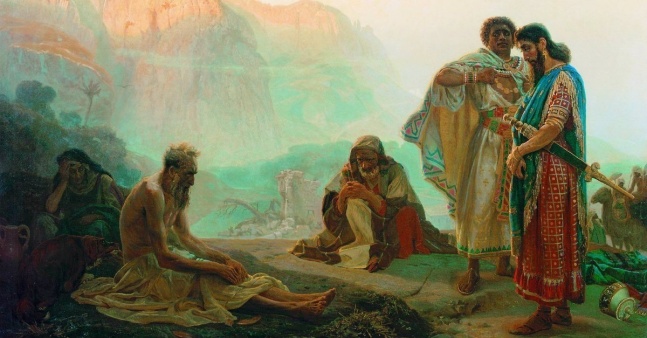 My family and I are working through the Book of Job together, several nights per week. I’ll be posting some questions, thoughts and reflections on the text as we go through the book. I’ll briefly address some of the questions, and I’ll leave others alone. Perhaps they’ll encourage you to think about this wonderful book, and the timeless questions it raises about God’s eternal purposes in our lives!

The opening sentences establish Job as a good and godly man. He “was blameless and upright, one who feared God, and turned away from evil,” (Job 1:1). This doesn’t mean he was perfect, of course – just that he was a godly man. In an economy based largely on agriculture, he was clearly a very wealthy man (Job 1:3). His wealth and character marked him out as “the greatest of all the people of the east,” (Job 1:3). He was the proud father of ten adult children.

This book is likely set before the Old Covenant era,[1] perhaps in the aftermath of the Tower of Babel incident. Job acts as the priest for his family, and routinely brings burnt offerings to the Lord on his children’s behalf; “for Job said, ‘It may be that my sons have sinned, and cursed God in their hearts.’ Thus Job did continually,” (Job 1:5).

Why does Satan have direct access to Yahweh’s throne room, in heaven (Job 1:6)? What does this tell us about fallen angels? Is this still normative today? It at least tells us Satan had access during this particular time. We have no idea if this is normative, or if all fallen angels have this privilege. The author of Job isn’t interested in this detail, so I’m not too interested in it, either.

Why does Yahweh even mention Job to Satan (Job 1:8)? His tone sounds sarcastic and taunting – what’s His point? Satan responds with a bit of commonsense logic:

Does Job fear God for nought? Hast thou not put a hedge about him and his house and all that he has, on every side? Thou hast blessed the work of his hands, and his possessions have increased in the land. But put forth thy hand now, and touch all that he has, and he will curse thee to thy face (Job 1:9-11).

How many alleged “Christians” today only claim to love and worship God because their lives are comfortable? If circumstances change, what will happen to their “love” and “devotion” for the Lord? I think, for many professing Christians, Satan’s words are perfectly applicable.

Satan acknowledges Yahweh has “put a hedge about him and his house,” (Job 1:10). Is this normative? Can Christians expect God has done the very same thing to them? What does this “hedge” consist of? An angelic host of bouncers? Restraining the evil impulses of those who would do us harm? All of the above? Or, is this not a normative thing? How does the notion of “common grace” fit in, here? Does it?

The text tells us Satan can only attack Job because God permits it:

And the LORD said to Satan, ‘Behold, all that he has is in your power; only upon himself do not put forth your hand.’ So Satan went forth from the presence of the LORD (Job 1:12).

What does this tell us about God’s power, in relation to Satan’s – who is in charge? What are the implications for our lives? Does anything happen unless God specifically permits it? So, why do bad things happen to Christians? What does this say about God? What does this say about our perspective, that we would ask this question and implicitly doubt God’s holiness and goodness? Are we offended by the idea that God might intend that His people suffer through difficult times?

Is God’s goal to make our lives comfortable; or, are we supposed to serve Him in whatever way He wants us to serve? The Book of Job is one long treatise about God’s sovereignty and human suffering; this means it’s probably the most extended teaching God has given us on this subject. How should this inform how we read and understand the rest of the Bible, particularly when it comes to the issue if God’s sovereignty and the nature of evil?

In rapid succession, on the same day, all Job’s children die and all his world possessions are stolen or destroyed (Job 1:13-19). Take a moment and think about this. Think about your life, and your possessions. Really think about it, and imagine this happened to you. Then, imagine you’re Job – how would you feel? What would you be tempted to say? What would you be thinking about God? About His goodness, holiness, and righteousness? About fairness? Is He cruel for allowing you to raise ten children, only to snatch them away in an instant?

Job responds with mourning, which is to be expected (Job 1:20). However, what he says is not expected:

And he said, “Naked I came from my mother’s womb, and naked shall I return; the LORD gave, and the LORD has taken away; blessed be the name of the LORD.” In all this Job did not sin or charge God with wrong (Job 1:21-22).

[1] The date for Job is widely discussed, and I have no interest on weighing in on this. I believe Job lived sometime during the era of the patriarchs.

“Scholars have traditionally placed the events of this book in the patriarchal period, citing the absence of any reference to covenant or law. Two facts join to support the conclusion that the book is set before the time of Moses: Job’s service as the family priest and the lack of reference to a sanctuary. Against such an inference, we need only note that Job is not an Israelite (he is from the land of Uz, 1:1). We would therefore not expect any reference to covenant or law, priest, or temple,” (John H. Walton and Kelly Lemon Vizcaino, Job, in NIV Application Commentary [Grand Rapids, MI: Zondervan, 2012], 23).

Robert Alden summarized, “The facts about him, which are mainly in the first two chapters, suggest that he lived around the time of the patriarchs. His wealth was measured in cattle rather than in the precious metals of the time of Solomon. He reflected no knowledge of organized religion, Mosaic, Levitical, or otherwise. Like the patriarchs he was a priest to his own household (1:5). The only other explanation for this absence of anything from the Pentateuch in Job is that he lived outside the promised land and beyond the influence of the law of Moses. Probably both explanations are correct; that is, Job was very early and he lived in a region well outside Canaan,” (Job, in NAC, vol. 11 [Nashville, TN: B&H, 1993], 26).