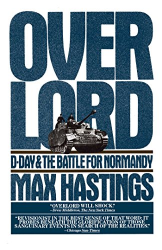 In 1984, the British journalist and military historian Max Hastings published Overlord: D-Day and the Battle for Normandy. This is a balanced, excellent account of the Allied invasion of France in 1944 (Operation Overlord), and the subsequent battle for Normandy in the months that followed.

The book’s principal strength is its unflinching analysis of the relative strengths and weaknesses of the British, American and (to a lesser extent) Canadian armies which led this invasion force. Most “popular histories” of World War 2 are hagiograpic; that is, they romanticize things. The Americans are often portrayed as infinitely competent, the British plodding and over-cautious, and the Germans faceless ciphers.

He presents the Americans and British (particularly the Americans) as amateurish, and no match for the German army when it met it in anything like equal numbers. Instead, the British and Americans are solid, competent, plodding, but nowhere near the brilliant fighting force some popular historians (e.g. Stephen Ambrose) often portray them as. Indeed, it was its remorseless logistical advantage which allowed the Allied armies to grind the German army into submission:

… it was the Allies’ superiority of materiel that enabled them to prevail at last, assisted by competent generalship and a solid performance by most of their men on the battlefield (373).

This kind of analysis may startle some American readers, particularly those who have not read a bit more widely. Hastings continued:

The allies in Normandy faced the faced the finest fighting army of the war, one of the greatest that the world has ever seen. This is a simple truth that some soldiers and writers have been reluctant to acknowledge, partly for reasons of nationalistic pride, partly because it is a painful concession when the Wehrmacht and SS were fighting for one of the most obnoxious regimes of all time (370).

The primary difference between these armies, Hastings believed, was a fight for survival. The German army, for a variety of reasons, fought with something akin to fanaticism. The Americans fought as if they had a dirty job to do. The British were anxious to minimize casualties, as Montgomery led Britain’s last great army in the field.

Normandy was a campaign which perfectly exemplified the strengths and weaknesses of the democracies. The invasion was a product of dazzling organization and staff work, and marvelous technical ingenuity. Once the armies were ashore, there was no firework display of military brilliance. Instead, for the armies, there was a steady, sometimes clumsy learning process. Each operation profited from the mistakes of the last, used massed firepower to wear down the Germans, absorbed disappointments without trauma.

This last was a true reflection of the nature of the struggle: most German commanders, amidst the insuperable difficulties of grappling both with Hitler and the allies, declined towards a state bordering on hysteria. Among the Allied armies, however, there was sometimes gloom, but never real alarm or nervousness. These symptoms were more in evidence at SHAEF, where the role of impotent spectator taxed some men, even the highest, beyond endurance.

Montgomery and Bradley and their staffs and corps commanders merely fought, reconsidered, and fought again until their resources granted them victory (373-374).

Hastings provides an inspired, brief but comprehensive and lively account of the immediate lead-up to Overlord, and the battles which followed. His analysis is sound, logical, and insightful. I appreciated his attempts to go beyond hagiography and lay bare the fact of the matter. I believe the record bears out the conclusion that the Americans and British were competent, the Germans were clearly superior, and the Russians who pressed Germany from the east had become an extraordinarily formidable foe by 1944.

For some further reading, I’d suggest the following: